The Leaning Tower is not the only attraction in the city of Pisa.

Actually when the building complex at Field of Miracles was built, the bell tower wasn’t intended to be the centerpiece of the square.

Campo dei Miracoli was medieval Italy’s grandest building project and even today it is one of the main attraction of Tuscany and Italy. 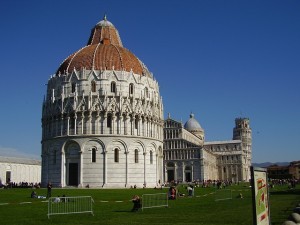 Field of Miracles, The Dome and Baptistery

Besides the Leaning Tower, you can find there the magnificent Il Duomo (Italian for The Dome) and the Baptistery.

Even the harshest skeptic must admit the Leaning Tower is the drawcard of the square.

But once there, it’s the whole complex that captures you.

The centrepiece is Il Duomo, the Cathedral, one of Italy’s major architectural monuments.

The multi-layered open-air arches on the facade are pure elegance. In fact, each column here is slightly different. The grey and white striped stonework is a trait unique to Tuscany. The cavernous interior features 68 soaring stone columns. 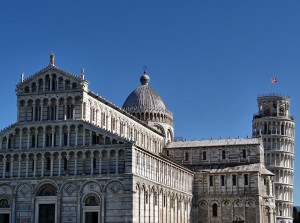 The candlelight doesn’t quite reach the ceiling, making them appear endless, as if reaching for the heavens while the enormous gold mosaic of Christ looks down from behind the altar.

The cathedral is a treasure trove of Italian art. Giovanni Pisano’s eight-sided pulpit, supported by statues symbolising the virtues, is the finest example of Italian Gothic sculpture anywhere.

Relief panels depict scenes from the Bible in such intricate detail it’s hard to believe this is a 700-year-old work of man.

There are other treasures too, in particular a beautiful St Agnes by Andrea del Sarto and several paintings by Ghirlandaio, a master in his own right and a man who heavily influenced a young Michelangelo.

The majority is now displayed in the adjacent Museo dell’Opera, especially those deemed too priceless to stay in the Duomo. Another section of the museum is dedicated to ancient Egyptian and Roman works of art. 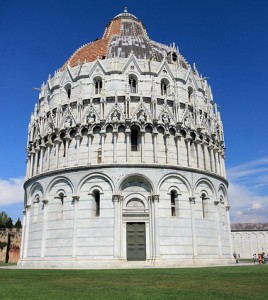 The third building in this brilliant triumvirate is the Baptistry. Begun in 1153, its place is at the head of the field, a symbolic crown in Romanesque style.

The exterior is beautiful with its arches and columns capped by a distinctive dome of red tiles.

Away from the Field of Miracles hides a rare jewel often overshadowed by Pisa’s landmarks.

Nestled by the banks of the Arno river is the Santa Maria della Spina, a delightfully small Gothic church adorned with enough pinnacles and spires to do justice to a building twice its size.